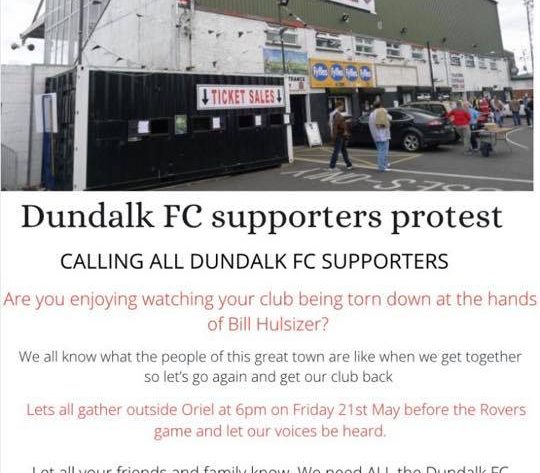 It’s been another turbulent week on and off the field for Dundalk FC with Friday’s disappointing home defeat against Sligo Rovers preceded by an astonishing Shane Keegan interview on Newstalk, in which the recently departed Dundalk “team manager” openly admitted he had little to no say in first-team affairs despite the job title assigned to him by the club in the off-season, while if things weren’t already bad enough over the weekend it emerged several Dundalk FC players had been spotted in Belfast prior to the governments easing if travel restrictions leading to the cancelation of training with Covid-19 testing now required ahead of this weekends trip to take on Finn Harps.

Over the course of this dramatic weekend, a Facebook page titled “We want our club back Dundalk FC” appeared in order to promote a fan protest outside of Oriel Park before the clubs next home game which happens to be against none other than Dundalk’s old rivals and defending league champions Shamrock Rovers on Friday, May 21st. Given recent events at Old Trafford, some onlookers have voiced concerns that similar circumstances could play out in front of the RTE cameras for what is always one of the highlight games of the League of Ireland season.

However, the protest organisers insist they plan for any such demonstration to be a peaceful one with their goal the removal or resignation of current Dundalk FC chairman Bill Hulsizer. Speaking to BetweenTheStripes.net, the protest organiser who wished to remain anonymous told us why this campaign had been created and what the ultimate goal of the protest was.

“Our planned protest is to raise our concerns regarding the off-field running of the club by the chairman, Bill Hulsizer. We want him to either resign or to be removed as chairman of Dundalk FC. It’s quite obvious that online petitions, social media posts, and banners displayed at recent matches haven’t worked or have gone unnoticed, this is why we aim to make a statement on the 21st May and that statement is that the Dundalk fans have had enough and want Bill out. These sentiments have been echoed throughout the Dundalk fan base and the idea of a protest has received a very positive response”, claimed the group spokesperson.

Despite a winter of major on-field investment with a number of overseas recruits and fully capped international players being signed by Dundalk FC the Lilywhites currently find themselves just three points outside of the relegation play-off position and still managerless almost a month on from the departures of Shane Keegan and Filippo Giovagnoli. Despite all of that, the leader of the planned protest on May 21st insists fans are not overreacting to the recent run of poor results and that the anger being felt around the Town has as much to do with off-field controversies as underwhelming on-field displays.

“This protest is targeted at Bill Hulsizer first and foremost and not Peak6. I suppose if you were to observe from afar you may see a club who’ve been spoilt by success, had a poor season, and thrown the rattle out of the pram, however, I guarantee this isn’t the case. We’ve been patient with the regime at Oriel but we have had enough. Fans are beginning to realise that we simply cannot sit back and watch helplessly while Hulsizer is dangerously close to the self-destruct button. On-field performances however bad they’ve been are not the biggest issue here, it’s the future of our football club and at this moment in time it’s in the hands of the wrong man”, declared the group’s member fielding our questions.

While there have been minor protests by a small group of supporters behind one of the goals at Oriel Park in recent matches as well as a statement released on social media by the clubs most vocal supporters group known as the Shed Side Army there is little in the way of a unified fan movement at Dundalk which makes it difficult to gauge how much genuine support an organised protest such as the scheduled one on May 21st might actually receive. However, “We want our club back Dundalk FC” insists they are representing a widely held viewpoint among the club’s fanbase.

“The response to the movement and planned protest has been largely positive and we anticipate that there will be a big turnout from fans both young and old. This movement is what was needed to bring fans together and show the powers that be what fan power can achieve, together we’re stronger than we are as individuals. It must be outlined that this is a peaceful protest and over the coming weeks it will be reiterated that any fans intent on causing trouble won’t be welcome, also face masks and social distancing needs to be observed making the protest as Covid friendly as possible” stated the group.

Again, as stated above with Dundalk FC currently without a unified fan group or official supporters club it’s difficult to mark exactly how strong the feelings are on any ongoing matters at the County Louth club although judging from the many Dundalk FC fan forums, podcasts and social media platforms one area supporters do seem split on is the current ownership of the club. While some Dundalk fans would like to see the clubs American owners Peak6 depart entirely others feel the current model can be a success with a new chairman at the helm. That is a viewpoint the May 21st protest organisers seem to harbor as they insist their planned protest is not an anti-Peak6 event.

“I think this is what needs to be made clear about this protest and that is that it’s not Peak6 we want out. The fan base is somewhat divided on Peak6 at present and the current chairman certainly isn’t helping matters, for some fans, the jury is still out. As for Bill and how he has gone about his business as chairman at Oriel Park, we’re all singing off the same hymn sheet, we want him out and I suppose this is what makes a protest like this one so poignant, we’re all in agreement and there’s no question about that”, claimed the anonymous spokesperson for “We want our club back Dundaklk FC”.

Going back to the lack of an established supporters trust or committee at Dundalk FC, local man Ciaran Callan recently held an online town hall meeting in order to try and gauge support for the establishment of such a project. Asked if “We want our club back Dundalk FC” felt this was a necessary venture going forward the group’s spokesperson revealed he and his counterparts involved in the planned protest movement on May 21st were in full agreement an official supporters club is needed at Dundalk FC.

“Without a doubt, a supporters club or trust is absolutely necessary in the running of a football club, and times like these highlight why. It’s vital that there is a direct link between the fans and the board and I think that’s the reason why Hulsizer has got away with so much during his tenure, there’s nobody to stand in his way. We’ve seen local staff let go from their positions and the club has been disconnected from the local community piece by piece and I don’t think this would have happened with an established supporter’s trust”, claimed the group’s spokesperson.

Picking up on the quoted remarks in regards to a disconnect between the club and the local community this has been a criticism put at the door of Peak6 by a number of Dundalk FC supporters in recent seasons with many long-standing club volunteers departing their roles at the club during the Peak6 era. While it should be pointed out the clubs marketing department have done well to bring a number of local businesses and partners on board in recent months some supporters have pointed to the fact a couple of high profile and long time local sponsors have ended their relationships with the football club also. This is a subject “We want our club back Dundalk FC” raised in our interview and they insist it’s another reason they want yo see Bill Hulsizer replaced as chairman.

“The town of Dundalk has always prided itself on its passion for football and Dundalk FC, the connection was at an all-time high during the Kenny era and into Vinny Perth’s reign. Over the last year, the club has drifted further and further apart from the local community, albeit hampered by the absence of fans at matches, the ludicrous decisions from the top have created a toxic relationship with the fans and a blatant distrust. This season Bet Regal has become our first ever sponsor who aren’t local, which speaks volumes as to how a local connection doesn’t seem to interest the powers that be.”

Asked for a concluding comment on the entire situation at Dundalk FC and the planned protest on May 21st the “We want our club back Dundalk FC” representative was again keen to stress the group’s message was not that they want to see Peak6 walk away from the club but they want the removal of Bill Hulsizer as chairman.

“It’s been mentioned to us to be careful what we wish for. And they’re very wise words, if Peak6 pulled out of Dundalk nobody knows what might happen, it could be back to a save our club campaign for all we know. With this being said, Peak6 inherited a financially stable football club with Millions in European money yet to be made available to the club, apart from a new toilet block and the removal of the infamous town end puddle I struggle to see where there’s been any sort of major investment into the club. At the minute we’re not overly enthusiastic at how Peak6 are running the club but are willing to have patience. Bill Hulsizers resignation is first and foremost on the agenda and if this fails to happen then our patience with Peak6 may just run out. Our message is clear, Bill Hulsizer out”, concluded the spokesperson.

Earlier this week, Kieran Burke headed into the town of Dundalk to chat with locals on the ongoing drama at the club and what their views on it were. Kieran also caught up with Ciaran Callan who is proposing the establishment of a new supporters club at Oriel Park. Watch the video in full below.

Also available as a podcast on the go. Simply search “Between the Stripes LOI podcast” wherever you get your podcasts from.