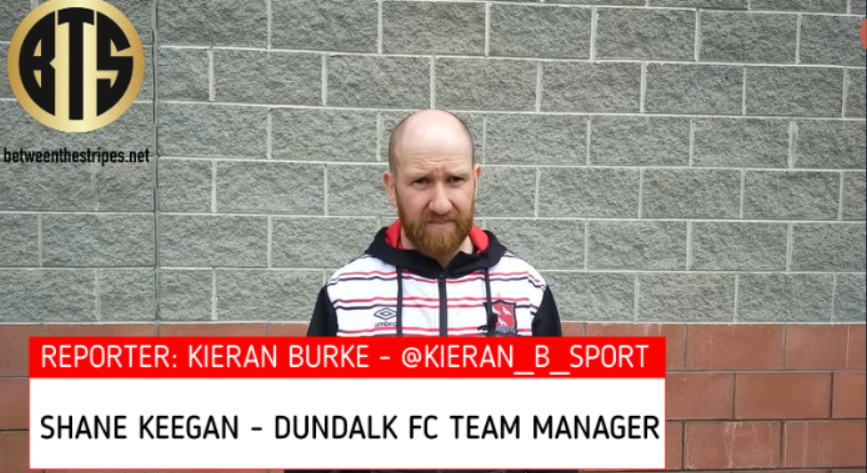 No confusion among players says Keegan ahead of Rovers clash

As criticism and question marks continue to surround the bizarre management team setup at Oriel Park following a disappointing start to the new League of Ireland campaign Dundalk FC team manager Shane Keegan insists a lack of clarity within the dressing room ranks is not to blame for the Lilywhites tally of just one point from the opening two games. A first home defeat to Finn Harps since 2006 on Friday last came as a shock to many but last season’s FAI Cup winners have little time to feel sorry for themselves with a trip to face the team who stole their league crown last season now fast approaching. Speaking at a media event at Oriel Park on Wednesday, Keegan insisted off-field matters were not an excuse for the team’s poor performance against Harps and to the player’s credit not that they would claim such themselves.

“People and media often read too much into players’ opinions and what’s going on off the field at a club, players only ever want to get on the pitch and play and perform. I think the media and other people put a hell of a lot more importance on all the other stuff than the players ever do so look what’s the easiest way to deal with all that noise? The easiest way is to perform and get results” said Keegan.

Just a matter of days before Dundalk’s Presidents Cup win over Shamrock Rovers members of the media were called to a press conference at Oriel Park where it was announced Keegan would manage the team this season with last year’s FAI Cup-winning boss Filippo Giovagnoli now filling the role of coach alongside his assistant from the 2020 season Giuseppe Rossi. Factor into the equation the club’s new Sporting Director Jim Magilton who has a rich coaching pedigree of his own and you can easily be forgiven for any confusion of who the main voice behind closed doors may be. However, when pushed to clarify if such confusion existed among the players Keegan brushed off such claims.

“I don’t think any of them (the players) have ever tried to make excuses of the setup off the field and I think in terms of the performance (against Finn Harps) am I saying it’s all on the players? Of course I’m not because did the system need tweaking? Did we make the right changes? There’s a hell of a lot that comes back on us but in terms of the player’s performance on the pitch they’ll be disappointed in themselves as individuals but I don’t think the reason any of them will say I didn’t play well is because I didn’t know who I was taking my instructions off of” replied the former Wexford Youths and Galway boss.