Dundalk FC team manager Shane Keegan feels the club’s hierarchy still has confidence in the first-team coaching staff or for the moment at least as the Lilywhites look to turn around the dreadful run of form which has blighted their start to the 2021 League of Ireland season. Despite picking up a point away to Sligo Rovers on the opening day Dundalk have gone on to lose three consecutive matches to Finn Harps, Shamrock Rovers, and Bohemians with pressure from local media and the clubs absent supporters continuing to grow as a result.

In fact, late last night an online petition calling for the removal of Dundalk FC chairman Bill Hulsizer appeared alongside a Twitter account calling for similar action to take place. At the time of writing said petition has been signed by over 300 Dundalk FC supporters as discontent among the locals appears to be ramping up in line with the team’s poor on-field showings.

“From our point of view the hierarchy is Jim (Magilton), that’s the role he was brought in as so I do be chatting to Jim on a daily basis obviously in terms of what we need to correct, what we need to try and get right and then we let him deal with it in terms of dealing with across the water so that’s how it works”, revealed Keegan in what was an interesting insight into the club’s communications protocols.

Following up on the earlier question about the chain of command at Dundalk FC, Keegan was asked by Between the Stripes TV if he still feels he and his management team have the backing of Peak6. Responding to the question Keegan replied:

“Yes, at the moment….being the key phrase, I don’t think in any set-up if results are going wrong for a prolonged period then obviously there’s going to be pressure or changes or whatever and we’re starting to get to a stage where we are burdened, we’re coming towards what you’d describe as a prolonged period so there’s no doubt we need to get it right ASAP and if we do we’ll be given space to turn it around and drive it on and if we don’t then changes will be made somewhere down the line but that’s only human nature you know.”

Having suffered two relegations as a manager with Wexford Youths and Galway, Keegan is no stranger to pressure but given the profile of Dundalk FC and the constant media scrutiny, this is certainly a different level of pressure and spotlight to what Keegan has endured before which one can only imagine isn’t an enjoyable experience for the Laois man. Despite all of that, Keegan is adamant he is still enjoying the day-to-day aspects of his role as team manager at Dundalk.

“I’m enjoying working with the players, I’m enjoying the fact that the players are not turning on each other and are not turning on the club in any way shape or form and they are determined to try and swing it all around, but enjoying match night or results or press conferences isn’t the most enjoyable at the moment for sure” joked Keegan who as ever appears in high spirits despite the weight he is carrying on his shoulders at present. 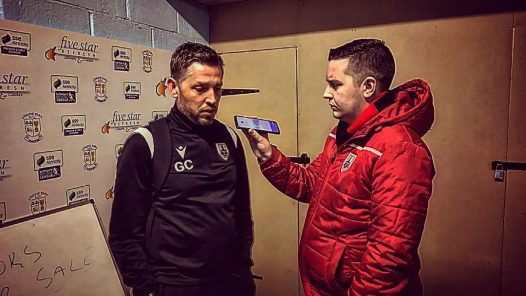