Dundalk FC’s Chief Operating Officer Martin Connolly has confirmed that the County Louth club is looking into a safer and legal alternative to the pyrotechnics which has been widely used by a section of the club’s supporters in recent seasons. Connolly, who returned to the club as COO following a successful locally-based takeover at the end of last season, has admitted the fines being handed down to the club for the use of such devices, as well as the safety issues they pose, have become a “big problem” for Dundalk FC.

“It is a big problem, it’s a problem for Dundalk and for League of Ireland in general.”

“We had hoped in our first year back that people would listen to us and cooperate so going forward maybe we’re going to have to approach those involved and sit down with them and explain what’s going to happen (if it continues).”

“I think there are going to have to be steps taken because they (flares) are a very dangerous thing and whereas people say they (pyro) add to the atmosphere, I think the risk involved outweighs any sort of improvement in the atmosphere”, said Connolly on S6EP36 of Between the Stripes LOI podcast this week. 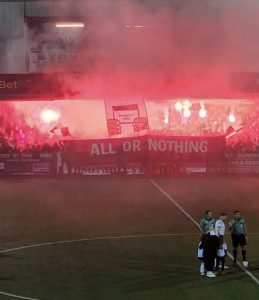 It has not just been home games at Oriel Park where issues have arisen for the Dundalk FC management this season. The club was fined €1,150 by the FAI, following the use of pyrotechnics by away supporters during the Louth derby against Drogheda United at Head In The Game Park, at the end of September.

Given some flares can burn at up to 1600 degrees Celsius, it’s easy to understand Connolly’s concerns and it is such worries coupled with the financial penalties being levied against Dundalk through their use that have led the club to seek alternatives.

Cold-burning flares have been trialed in Denmark with Connolly confirming the club is exploring the possible benefits of these newly developed pyrotechnics which burn at a much lower temperature than a traditional flare.

“We have looked at and are looking at a safe pyrotechnic that’s not actually a pyrotechnic, but it has the same effect, that has been suggested to us and we are looking at it at the moment”, confirmed Connolly.

It hasn’t just been the use of smoke bombs and flares by supporters that has caused headaches at League of Ireland grounds this season with Connolly admitting his belief that anti-social behaviour has been on the rise at domestic matches this year. Just last weekend, Sligo Rovers home game with St.Patrick’s Athletic was halted due to disturbances on the terraces while the FAI have recently brought in a ban on bottles being brought into grounds to tackle an increase in objects being thrown onto pitches.

“Unfortunately, it seems to have been more apparent since the comeback from Covid-19, but you could easily argue that in general the crowds seem to have increased and if you’re increasing crowds, you may increase other problems”

“I think we all have to work together because it’s not something we want to be seen on a regular basis, objects been thrown on the pitch, games having to be stopped, that sort of thing because I think the league is improving, the crowds are coming back so it would be disappointing if any increase in gates would have to be matched with increased security costs as it defeats the whole purpose.”