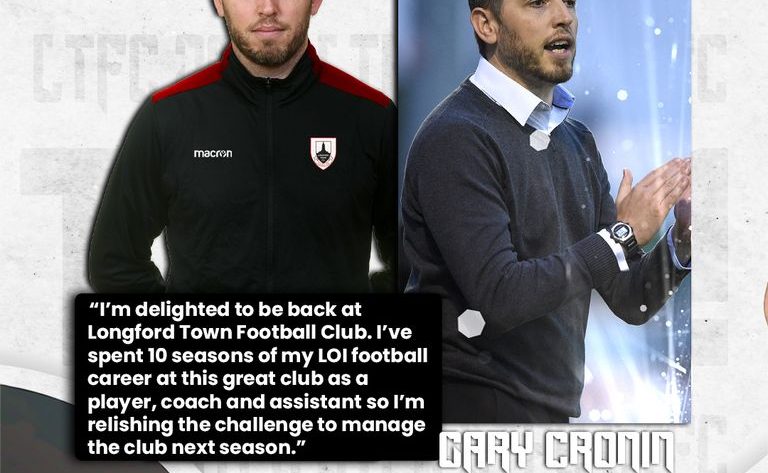 New Longford Town manager Gary Cronin faced the media for the first time on Friday following his return to the club earlier in the week. A former player, assistant, and caretaker manager at the Midlands club, Cronin has spoken in the past of his desire to one day manage “De Town” and he will now realise that dream in time for what is shaping up to be an ultra-competitive 2022 First Division campaign.

“To be honest, I always had that feeling I might get to manage the football club”, said Cronin when asked about his appointment before adding: “For me, it was the right time to move on and I wish them (Bray Wanderers) all the best with that (the takeover)”, in regards to his recent Bray Wanderers departure following the takeover of the club by Cabinteely.

Cronin fills the vacant hot seat at Bishopsgate after Daire Doyle parted ways with the club just three games out from the end of the 2021 season, prior to Doyle’s assistant John Martin taking charge for the remaining matches. Martin essentially ruled himself out of the running for the managers post following Town’s humiliating final day 5-0 hammering away to Finn Harps, but his successor today admitted he has taken council from the former Longford & Shamrock Rovers midfielder Martin since taking the job.

Speaking to BetweenTheStripes.net in the aftermath of the horror show in Donegal, Martin aired his view that perhaps a freshening up of the squad might not be the worst of options for whoever took up the managers role, given the “mental scars” and baggage many of the 2021 squad may carry following a tough campaign that ended in relegation and just two league wins all season.

Speaking to BetweenTheStripes.net on Friday, Cronin admitted that was a view he wasn’t totally opposed to.

“It (the squad) definitely needs a bit of freshening up, I speak to Johnny a lot, I played with Johnny, so I got his views on a lot of the players but there are some good young players there for the future but there’s definitely an element of a few good players that might move on just to freshen things up to see if we can get a reaction”, remarked the new Town boss.

Having served as Tony Cousins assistant when Longford were relegated in 2016, Cronin is well placed to draw comparisons between the most recent crop of Town players and their struggles last season with the challenges faced by the class of five years ago. Cronin described that 2016 season as something of a “carbon copy” at Friday’s virtual press conference with the Town boss acutely aware of the difficulties that follow relegation. However, such challenges are part of the job according to Cronin who must now set about assembling his army for a promotion charge in 2022.

“You have to experience the struggles of last season to know how to deal with them, take the positives and bring them on to next year to bounce back.”

“It’s my job as manager to change their mind-set to try and win games again every week in the First Division, to pick them up and bounce back”, said Cronin.

In terms of who will assist Cronin with such tasks, the new man in revealed he is in the process of having “one or two conversations” with people he might look to bring into his backroom set up at Bishopsgate but given those conversations were ongoing he wouldn’t be drawn on them for the moment.

A quick browse on social media will reveal a rather deflated atmosphere surrounding the Longford Town fan base at present with relegation quickly followed by the departure of some of the club’s star performers of recent seasons and the expectation for further big-name exits in the coming days. When asked if followers of the Red & Black could expect any positive updates this side of Christmas, Cronin revealed he was hopeful of delivering the supporters an early Christmas present or two.

“Hopefully sooner rather than later, obviously we’re working hard, it’s the hardest time of the year for managers, so I’m talking to a lot of players who I think might fit into what we’re trying to do, but as for the expectation for before Christmas then yes, I’d certainly hope so”, commented Cronin on possible recruitment news in the coming weeks.

While Cronin appeared to carry a quiet confidence that he could lead his old new club back to bigger and better things next season, the former Middlesborough youngster is clearly under no illusions as to the challenges that may face Longford in the second-tier next year.

“The goal for Wexford, Cobh, and Athlone is the same, to try and grab one of those play-off spots, that’s the mind-set every team in the First Division starts out with even if the reality of that is a different thing, it’s going to be a battle”, admitted Cronin.

Next season could see at least three teams operating on a full-time basis in the First Division with just nine teams taking part across a 33 game season following the Bray/Cabinteely merger. That means there will only be three play-off places as opposed to the four on offer in recent seasons with full-time sides Cork City, Galway and Waterford naturally favourites to feature in the top-four. With the champions going up automatically, that leaves just one play-off place if the season plays out as many are expecting but Cronin was quick to point out full-time status guarantees nothing in this league.

“I can see the desire behind three full-time teams trying to bring Premier Division football back to their cities but we’ve seen enough football matches down the years to know full-time or part-time it guarantees nothing, Galway were full-time last season and didn’t win it (the league/promotion), Cork didn’t make the play-offs, from our point of view we can’t control what others do in terms of full-time or part-time, all we can do is train to the best of our ability and try to win matches but I’ll tell you, we’ll be competitive and we’ll be looking at that top-half of the table”, said a bullish Cronin.