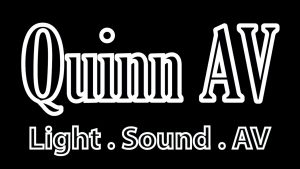 Between the Stripes LOI podcast is delighted to introduce Quinn AV as our new sponsor. A family run business based in Athlone, Quinn AV has been supplying technical production solutions to a wide spectrum of events throughout Ireland for many years. Press launches, gala dinners, indoor & outdoor festivals, Quinn AV’s specialist production team ensure that the event looks and sounds spectacular thanks to their professional standard of service which exceeds clients’ expectations every time.

The partnership between Quinn AV and Between the Stripes LOI podcast could be described as a match made in LOI heaven (to borrow a Joey Ndo quote), as Quinn AV are the driving force behind one of the league’s best quality LOI TV streams at Athlone Town AFC.

Quinn AV have been long-time listeners and supporters of Between the Stripes LOI podcast and their support as sponsors will allow us to continue to invest in and improve our popular weekly show.

Between the Stripes founder, Kieran Burke had this to say on the sponsorship deal: “As someone who has been involved with LOI TV this season, I’ve seen firsthand the level of professionalism and expertise Quinn AV have brought to the table in terms of Athlone Town ‘s media offerings. To have Quinn AV on board as Between the Stripes LOI podcast sponsor is very exciting and it will allow us to continue to improve and develop the show for our loyal weekly listeners. I’d like to personally thank Quinn AV for their support and it goes to show not every Athlone fan is bad😘.”

Anthony Quinn of Quinn AV commented: I’m absolutely delighted to have the opportunity to sponsor Between the Stripes LOI Podcast and help in a little way with their continuation. I have been a listener for many years and their coverage of the LOI is top quality and completely independent.”

You can subscribe to Between the Stripes LOI podcast on Apple, Spotify, Amazon Music, Google Podcasts and all major and minor podcast providers.